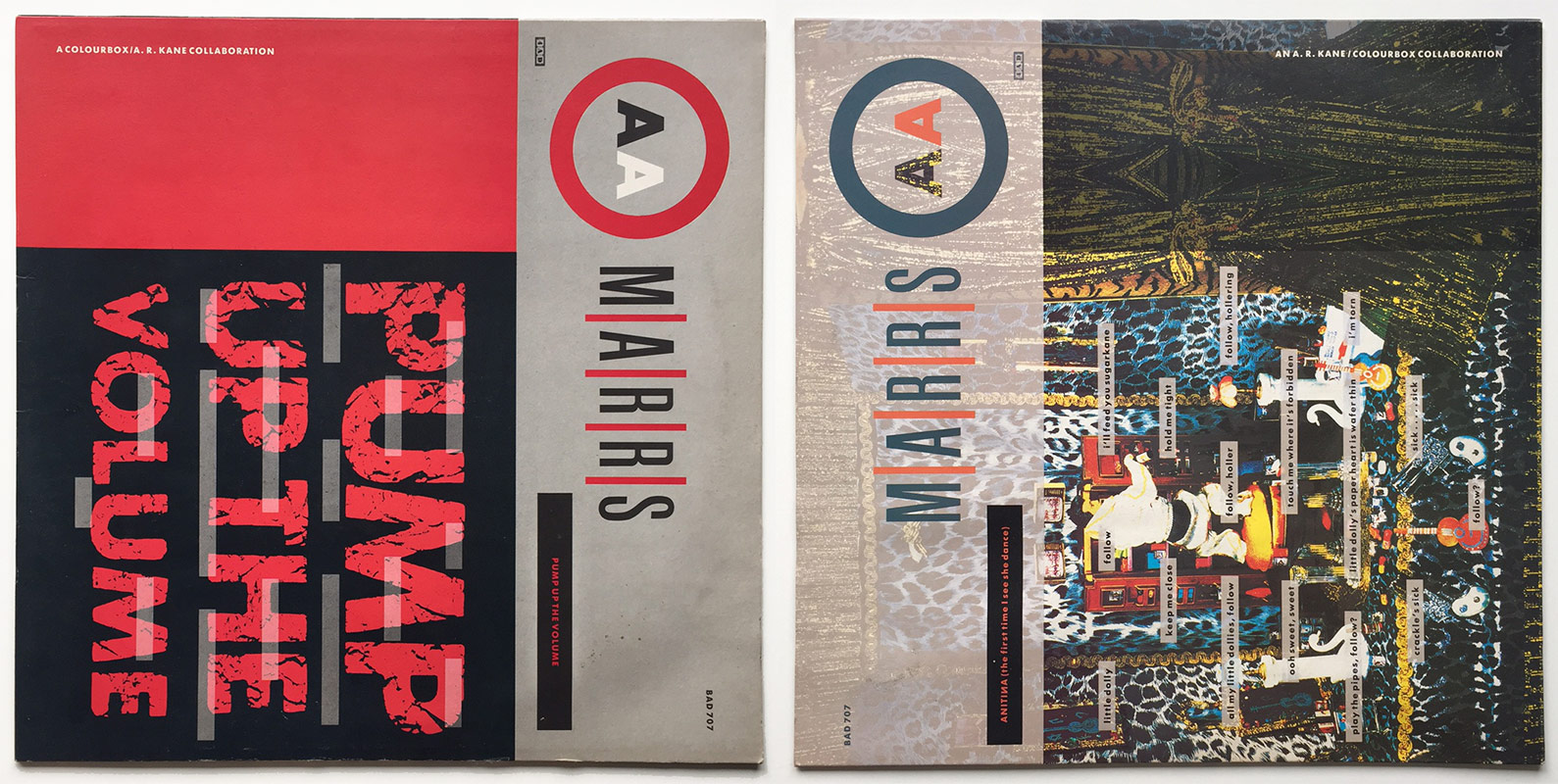 This may be the first 4AD release I’ve mentioned on here, and I’m pleased it’s come about, as 4AD is a label with almost invariably good artwork. As the spine of this 12″ proudly states: “Art Direction & Design : Vaughan Oliver; Photography and Set Construction : Panni Charrington; MARRS”. So, in a traditional Western left-to-right reading hierarchy, the credits for the design and photography come before the artist.

Vaughan Oliver is, of course, something of a legend in the area of music design. Through his work for 4AD, he’s responsible for the very familiar, now iconic visuals for releases by Pixies, Lush, The Breeders, Cocteau Twins and a huge number beyond that rather obvious selection. On this Marrs 12″, there’s a typical use of jarring layout (the orientation of text elements is designed as shown in the image here, if we use the opening of the sleeve being on the right as a guide to ‘correct’ positioning), mysterious imagery (the rear sleeve, also shown here, depicts a highly colourised image showing what looks like Elvis atop a burger, holding a bottle, surrounded by guitars, swans, TVs and maybe a gun), and a strong sense of typography and space (large blocks of colour, the distinctive use of somewhat bland typefaces). The circled AA device is a particularly nice, albeit subtle, way to denote a ‘double A-side’ record, where both sides share equal importance.

Panni Charrington, based on having a distinctive name, and hoping that Google is quite clever in joining together the dots of the internet, seems now to be known as Panni Bharti.

This was a pretty revolutionary record. MARRS are summed up neatly by Wikipedia: “MARRS (stylised M|A|R|R|S) was a 1987 recording collective formed by the groups A.R. Kane and Colourbox, which only released one commercial disc. It became ‘a one-hit wonder of rare influence’ because of their international hit ‘Pump Up The Volume’.” That hit was everywhere around the time of its release, and in part heralded the introduction of ‘dance’ music, and sampling, into the mainstream musical mindset. Although I bought this actual record much later than its release – it was a charity shop find in the mid-2000s – as an inquisitive and inventive 13 year old, as I was in 1987, ‘Pump Up The Volume’ was one of tunes I listened to a lot, recorded from the radio, and self-remixed into several different versions using a double-tape-deck player, which allowed one tape deck to play while the other recorded.